Why Do Cats Have 2 Different Colored Eyes? 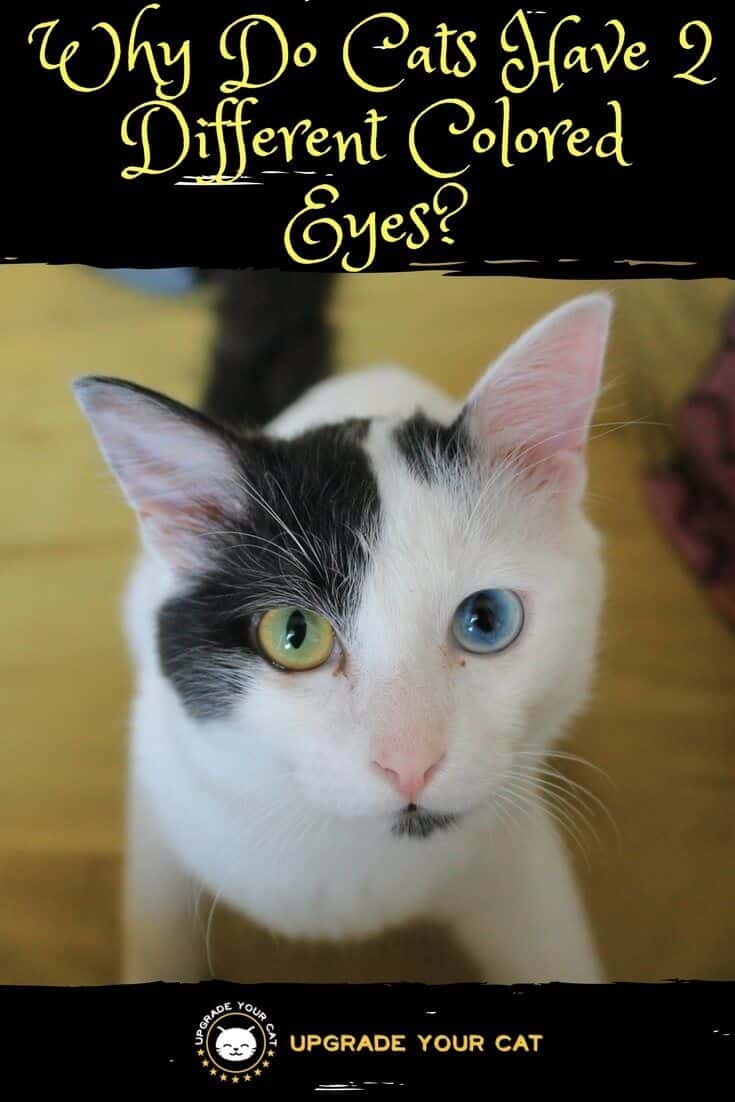 One of the most mesmerizing features of a cat is their eyes. Whether they are a deep blue, bright yellow, emerald green, or somewhere in between.

If you’ve ever seen a cat with two different color eyes it’s even more mesmerizing, and not that uncommon either.

But why do cats have 2 different colored eyes sometimes?

It’s actually referred to as odd-eyes, which makes sense. The scientific term is Heterochromia Iridis, which comes from the Greek for ‘differently colored irises’.

It’s no coincidence that often it’s white cats that have different colored eyes. The gene that makes cats white, is also responsible for the odd-eye abnormality too.

Eye color happens because of a pigment called melanin. The more melanin a cat has, the darker their eyes will be.

This is why all kittens start with blue eyes. Blue eyes mean they have no or very little melanin in their iris which is how they are born.

By the time a kitten is around 8 weeks old the melanin should have flowed into the iris and changed the color of their eyes to the color they will have.

If only one eye receives melanin then it will be a different color to the other. It’s just a genetic abnormality, it makes no difference whatsoever so the cat’s eyesight or health.

There are two types of heterochromia, partial, and complete:

Partial heterochromia – This is when one of the cat’s iris’s has more than one color in it.

Complete heterochromia – This is the more common outcome, it’s when one of the eyes is a different color to the other.

Can You Tell If Your Cat Will Have Different Color Eyes?

There is no way to tell for sure if a cat will develop different color eyes before they have reached the age that their eye color has developed.

It’s more likely if your kitten is white as the white spotting gene is a cause of heterochromia. As well as if either or both of the kitten’s parents have odd-eyes.

The only way to really be sure is to wait until the kitten is around 8 weeks or so of age. By then their eyes will have changed color.

There are some rare instances when a cat develops odd-eyes later in life, but this is extremely rare.

Heterochromia and having odd color eyes does not affect a cat’s health in any way. As described above, it’s purely down to the amount of melanin pigment in the iris.

If a cat’s eye changes color later in life however you should always get them checked out by a vet in case there is some other reason for the change.

It’s just an interesting quirk, and I’m sure you’ll agree that it gives a cat an extra little bit of uniqueness and personality.

There is actually an interesting market for heterochromia cats for sale, both in that some people want them and some don’t.

Some people find it interesting and want them, while unfortunately, some people will give away kittens that develop heterochromia as they think there is something wrong with them.