Who Else Thought All Dogs Are Male All Cats Are Female? 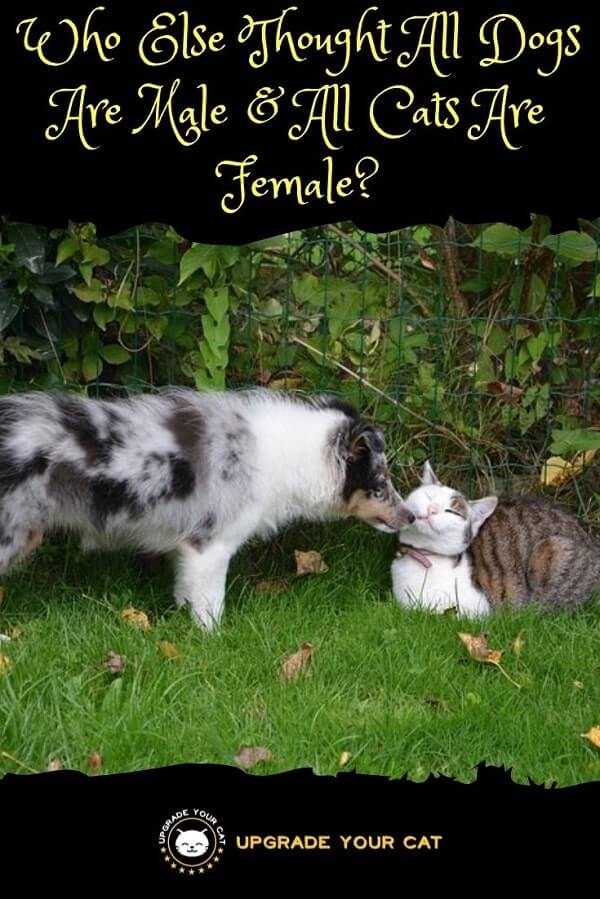 In this article, I thought I’d talk about something a little bit different. But I know it’s going to ring true for a lot of you out there, so I hope it’s interesting and helpful.

Growing up, I always associated cats with being female, and dogs being males. I’m not sure how different I thought they were as species, I just remember I was a lot older than I should have been when I found out the truth.

This was always something I had in the back of my mind and didn’t really talk about. Until a year or so ago I heard someone else say the same thing. Then someone else. Then I saw it discussed online….

As kids, these people also thought all cats were females, and dogs were males. Just like I did. So, I asked my friend who first said this to me why they thought this.

“I’m not sure, but it made sense why dogs were always trying to chase the cats. Plus, cats just look female, don’t they? They aren’t all butch like most dogs.”

That’s their words, not mine! But it provides some interesting insight into the mind of a child.

So, be honest here, who else thought all dogs are male and all cats are female as a child?

Don’t worry, we’re not alone and we’re not crazy. A lot of this is to do with how cats and dogs are portrayed in media, and there is some historical context to this.

This is a bit of a stereotype, but also has some truth to it. A big part of why people associate dogs with men is because they have long been called “Man’s best friend”.

This phrase was coined a long time ago when dogs were used to perform activities like hunting, guarding, watching, and tracking than they were domestic pets.

Men would be the ones going out and doing these activities, while women would typically stay home. Just as cats would stay home, or go out roaming with their own agenda.

That set a strong association between men and dogs, and women and cats. Which still rings true today with “Crazy cat ladies”, and “Dog guys”.

Women Are More Likely to Own Cats Than Men

Another factor that swings the gender association is the fact that women are more likely to own cats.

According to VMD, more women own cats than men, which doesn’t come as a surprise. It was a lot closer than I expected though, with 58% of cat owners being females. Women also account for 53% of dog ownership, so they clearly account for more pet owners than men in total too.

There are obviously loads of exceptions to this, but generally speaking, I think most people will agree that cats look less masculine than dogs.

I’ve experienced this first hand from both sides too. I have a female sausage dog, but when we’re out almost everyone asks, “What’s his name?” We even bought some pink accessories like a collar, lead and so on, and still got the same question.

I’ve had male cats too, only to have someone come round and ask, “What’s her name?” Why do people do this? I’ve looked into it and it’s a very common occurrence.

In my opinion, it’s because (most) cats look and act feminine, and (most) dogs look and act masculine. Cats move around gracefully, they spend a lot of time grooming, they’re cute, and so on.

While dogs are a lot more boisterous, will give chase to cats and other small animals, and enjoy physical activities and playing.

Then There Are the Cats That Are Only Female….

To further confuse matters, there are some colors of cats that are only female (with very few exceptions). Namely calico cats, which are black, white, and orange.

I’ve talked about Calico cats before, and why the majority of them are female. My neighbors had two calico cats when I was growing up. I remember to this day the old lady who owned them telling us “Tortoiseshell cats”, as she referred to them, were always female.

This was probably another bit of subliminal messaging that made me think the way I did. Let’s not forget, I was young at the time. So I may have taken her a little too literally! That’s my excuse anyway.

Did you grow up thinking cats were female and dogs were male?

If you have anything to add to this discussion or want to share your own experience, that would be great. Just leave a comment below and I’ll get back you, thanks.

What Are Female Cats Called? (Not What Most Think)