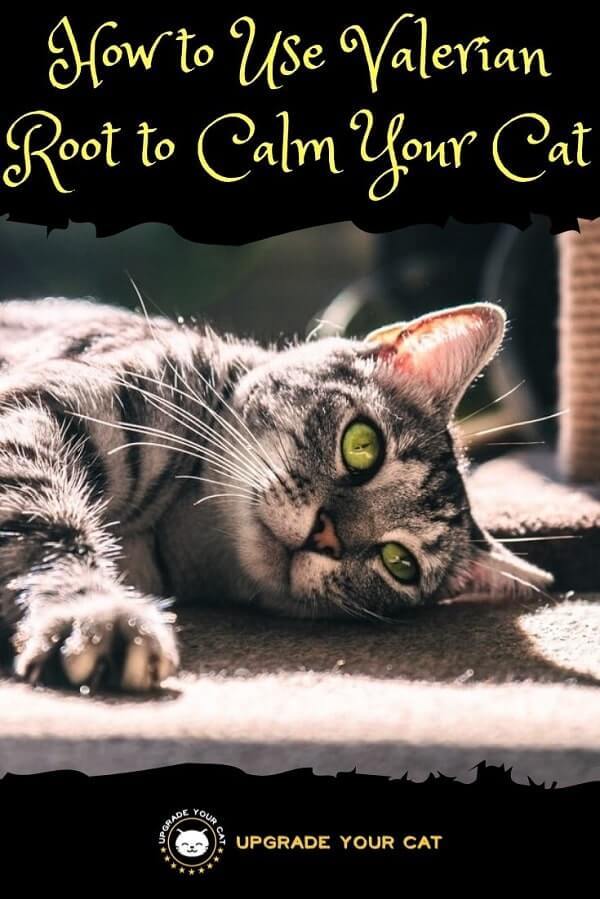 Do you have a hyper or stressed cat and need to calm them down? Do you enjoy watching your cats interact with catnip?

If so, you should try using Valerian root to calm cats in your household. It’s a fun, safe, and effective way to relieve stress and calm cats down.

What Is Valerian Root?

Valerian is a herb, and it’s the root of the plant that’s used in medicines and kitty toys.

It’s often referred to as “nature’s Valium”, due to its ability to help improve sleep and strong calming properties for us. It also has a similar effect on cats, as I’ll be explaining in this article.

It does this due to some of the compounds in the root. Namely; valerenic acid, isovaleric acid, actinidine, and a variety of antioxidants.

Actinidine seems to be the main compound that affects cats. This is also one of the active compounds found in catnip, so if your cats go wild for catnip they should enjoy Valerian, too.

When inhaled or ingested, these compounds change the chemical balance in the brain. As with most medicinal herbs, they offer a safe alternative to traditional meds.

There is no doubt that some cats go crazy for Valerian. Generally followed by a mellow, calming reaction. There’s small % that are not affected at all, as is the case with all herbs.

As with catnip, I like to know how much my cats are getting so I can monitor them for any strange reactions and make sure they’re not getting too much.

You can buy toys that have been laced or filled with Valerian, but I prefer to buy the herb dried and put it in their toys myself.

If you don’t have any little fluffy mice or suitable toys, pick up something like these catnip filled tea bags below on Amazon and add some Valerian.

Or, you can sprinkle some on their cat tree or hide a pinch in different places. It has a strong odor, so your cats aren’t going to have any issues detecting it.

Whatever stimulates them to get active and have some fun will work. Although, once they have a grip on the scented toy, don’t be surprised if they go into chill-out mode.

Want to try Valerian for yourself? Here is a Valerian and Catnip organic blend available on Amazon to try with your cats:

Why Give Cats Valerian Root?

Let’s be honest, when we realize our cats enter some kind of euphoria-like state from a herb like catnip, we are more than happy to give it to them.

It’s important to be aware that there are some practical uses for Valerian too. Such as:

You can use it as a natural herbal remedy to help a stressed cat feel, well, less stressed.

Your cat might be stressed due to moving home, coming back from a trip to the vet, loud noises like fireworks, introducing a new cat to the home, the list goes on.

Whatever the reason, a stressed cat is not a happy cat. It’s only fair you try and do something to help them out.

There is nothing fun about dealing with an aggressive cat. They are capable of doing us – and other cats – some serious damage.

Maybe you’ve just adopted a new cat, introduced a new cat into the home, or you’re not sure why your cat is being aggressive. It’s worth trying to calm them with some Valerian scented toys.

There are few things greater and more rewarding in my opinion than the bond between cat and owner.

By introducing some Valerian into their toys when you play they’ll associate the calming experience with you.

Trust me, this is better than winding up your cat and creating a hyperactive fall of chaos. Especially when you just want to be left alone to sleep and they want to play.

Related – How to use MiraLax with your cat.

Will Valerian Work on My Cat?

There is no way of knowing this without trying. I remember buying some catnip when I was a kid and giving it to our family cat, only to be disappointed that he didn’t want to know.

So, I tried it with the neighbor’s cat – the same thing, he wasn’t interested.

I thought I had a “duff” batch, but I went on to find out that only an estimated 50% of cats react to catnip. I guess I was just unlucky with those two.

The same applies to valerian. Some cats will react to it, and some won’t. I’m not sure what % are susceptible, but researching this online it’s estimated to be higher than 50%.

The good thing is that if your cat doesn’t react to catnip, it doesn’t mean they will be immune to all herbal stimulants. It’s still worth trying them with some Valerian.

If you want to see what it looks like when is affected by Valerian, just check out this guy rubbing it all over himself and rolling around in euphoria:

You should now be fully informed about what the herb Valerian root is, and how you can use it to help calm your cats and give them some enjoyment.

If you’re interested to know more about natural cat stimulants I recommend reading this post explaining what Matatabi (silver vine) sticks are too.

This is another stimulant that affects a larger % of cats than catnip, and also has some dental hygiene benefits.