Why Does a Cat Keep Coming to My House? 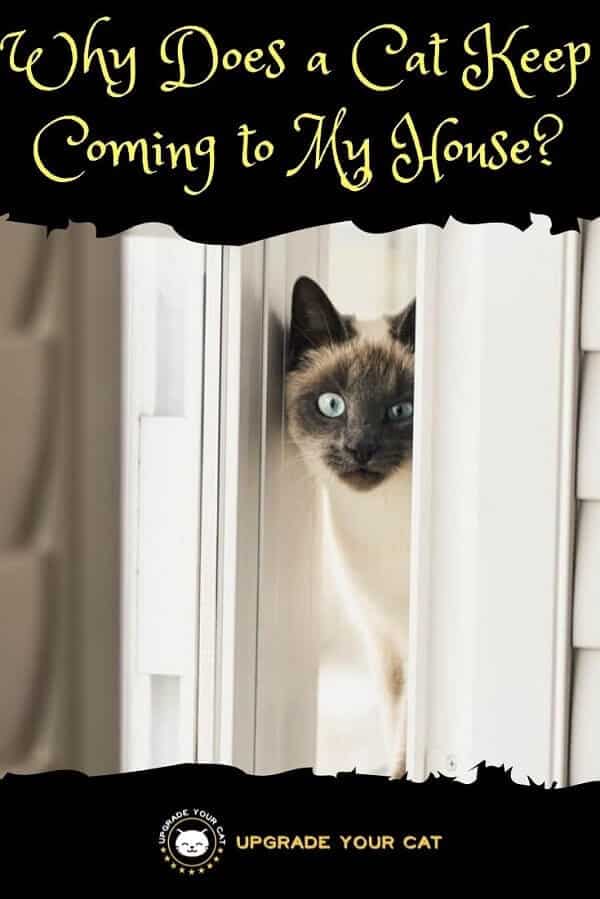 If you’re trying to figure out why a cat keeps coming into your house, it typically comes down to one or more of the following reasons:

If you want to put a stop to this behavior, in my experience it’s not that hard.

There are some things to consider, however. Such as who’s cat it is, what they’re after, and what’s going to happen to them.

Here’s everything you need to know about why cats enter people’s homes, how to change their behavior, and what to do about it:

How to Stop a Neighbours Cat From Coming Into Your House

First of all, it’s important to establish if the cat coming into your home belongs to a neighbor and has a home, or if it’s a stray.

I’ll explain what your options are with strays in a moment. If you know the cat belongs to someone, however, here are some of the things you can do:

As hard as it is to ignore a cute cat hanging around, it’s for the best if you want them to stop coming into your home.

You absolutely should never feed them. You’ll have to stop fussing them too. Cats enjoy a good fuss, and they also use it as an opportunity to rub their scent on you.

Related – Do stray cats stay if you feed them?

If they’re coming in through your cat’s catflap, you can fit a device to your cat flap that only allows your cat to pass through.

Like this one below available on Amazon, it’s programmed to work with a unique microchip on your cat. There’s no way any other animal can get through.

Use Scents That Deter Cats

Cats have a powerful sense of smell. This can work well for them, like when there’s food within a radius of their nose.

Or, it can work against them if there’s a scent they don’t like.

I’ve always had more success with home remedies that commercial “pet deterrent sprays”. So, I recommend making up a spray or using some of the scents they are known to dislike before trying a spray.

A few of the scents that cats are known to hate includes:

A couple of suggestions;

The first is to use essential oils or concentrated forms of any of the above scents. Mix with a little water and put into a spray bottle, then spray it around the areas in your yard and home entry points.

The second suggestion, which has worked for parents, is to sprinkle some pepper or place pieces of citrus fruits in your yard.

Coming across a chunk of citrus fruit that offends their nose or stepping on some pepper will make them turn around for sure.

Related – Can you use orange peels to stop cats from spraying?

Speak to The Cat’s Owner

If you know who owns the cat, it’s time to tell tales and let them know what their cat gets up to when they’re out roaming around.

It will probably come as a surprise to them that their cat has been hanging out in someone else’s house.

There are some things they can do to help, such as feeding them before letting them out, and neutering them if they haven’t been fixed.

Either way, it’s nice to let their owners know where they’re at and what they’ve been up to. As well as what you’re going to do to try and deter them in the future.

If a cat coming into your home is either feral or stray, meaning they are fending for themselves, then you need to handle the situation a little differently.

You can use all the same methods of deterring them as I covered above. Chances are most will work just the same, but the difference is they don’t have another home to go to.

It’s estimated there is a feral cat population in the U.S. of about 60-100 million. It’s a huge problem that local authorities struggle to deal with.

Still, the right thing to do is to either take responsibility for looking after the cat, or get the cat some help.

Peta has issued a brochure you can find here to help. In this document, they explain how to find out if there’s a trap, neuter, return, and monitor program in your area.

As well as how to check if the cat is in good health, and what to do if they’re in need of veterinary care. Along with some helpful numbers to call to find the appropriate authorities to help out.

Why Should You Stop Someone Else Cat Coming Into Your Home?

A lot of people welcome cats into their homes, which is the most common reason why most cats keep returning.

One of my cats spends a lot of time over at a neighbors house, so I know this all too well.

They started feeding her claiming they thought she was a stray. Even though she wears a collar with her name on!

Personally, I think they enjoyed having her around. In fact, I’m almost certain that’s the case.

We spoke about it, and I’m fine with it as they are only a few doors down. So, she spends a lot of time there now and we’re in contact via text so it’s fine.

Even with an agreement in place, there are some potential issues to letting someone else’s cat in your home though, such as:

Potential damage – There are a number of ways cats can cause damage or mess that – when it’s not your cat – feels even more annoying to deal with.

A Tom might be going into your home to spray and mark with their scent. They might scratch some furniture, make a mess on your carpet, the list goes on.

I’m not sure of the legal standing as it will vary depending on where you live, but you may be able to hold the cat’s owners liable. Or you may not, which could leave you with a repair bill.

It can become annoying – Cats can become very persistent when they’re on to a good thing.

If you’ve been feeding a local cat that’s been returning for food, when the time comes to stop them it can take weeks, even months for them to move on.

And who can blame them! They were getting a free meal at your place, so they’re going to hold out hope for another.

Conflicts with other pets – If you’re welcoming strange cats into your home, or at least not stopping them, chances are you like pets.

If you have other pets or intend to get a pet in the future there’s potential for a clash. Cats can become very territorial, and a lot of dogs will not tolerate cats.