My Cat Is Scared of Something I Can’t See! (Advice) 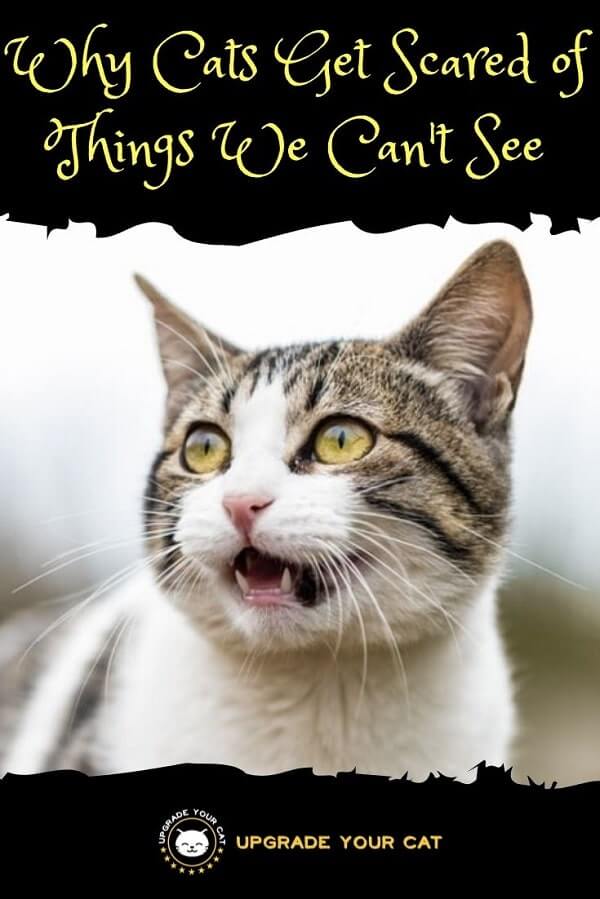 The other day my neighbor said to me, “It’s the strangest thing, my cat is scared of something I can’t see. But she’s really spooked out, and jumpy around me now.”

If this sounds familiar, it’s because it’s not that unusual.

Cats have heightened senses. Sometimes something can scare, spook, and confuse them that we barely notice.

If this is happening with your kitty, it’s important you do your best to find out what’s scaring them.

Cats that are frequently spooked or scared will become withdrawn, jumpy, and it’ll have a negative effect on their health in the long run.

Here are some tips to help you find out what’s scaring your kitty, and how to help them live a more stress-free life:

Why Does My Cat Get Scared of Nothing?

The thing is, it’s not “nothing” that’s scaring your cat. It’s something.

If it’s a sound, it can be something like a high-pitched noise in the distance. Or, maybe even an electrical device in your home making a noise that’s confusing them that you can’t hear or are so used to you don’t pay attention to it.

If they act like they’ve seen something that’s bothering them it may have been a quick flash of light, a shadow, anything that catches their eye.

Remember, cats are smart, but if they see a shape or a color they aren’t able to interpret exactly what is or understand the level of threat it presents like we are.

You’ll probably know this from playing around with your cat. If you’ve used a laser pointer, you’ll know your cat can’t tell the difference between a dot of light on the floor and something physical.

They literally try to grab the dot of light, don’t they? Then they’re confused when it’s not under their paws.

The same with shadows. I always make shadow shapes and mess around with my cats watching them chase shadows.

Cats are also highly tuned to feel vibrations. Someone walking around in a room above them can cause confusion.

They’ll hear a noise and feel vibrations all around them, but they don’t know it’s just someone in the room above.

How Can You Tell If a Cat Is Scared?

If it happens once in a while, there probably isn’t a lot you can do and it’s not likely to cause a heightened state of stress for your cat.

If it’s happening on a regular basis, however, and your cat is becoming jumpier you need to do something about it.

Here are some of the behavioral changes to look out for that are signs your cat is getting spooked on a regular basis:

Related – Why does my cat sleep under the bed?

How to Help You Cat If They’re Getting Spooked

There are a couple of parts to solving this;

The first thing you need to do is try to identify what’s scaring them. Does it happen at a certain time of day? Maybe only in a particular room?

Start narrowing down what’s happening at the time they get spooked.

It could be something as simple as the front door slamming, you entering a room, the way an object in the room reflects light, and so on.

Once you know – or at least have an idea of – what’s scaring them, you can do something to stop it.

Also, be prepared for it to be something that may seem silly to you. For example, a ceiling fan is a really common reason for cats all over the world being scared out of their wits.

The spinning of the blades, the noise, the way it causes shadows and light to flick around the room. It’s like they’re designed to annoy cats!

Every cat is different, too. It could literally be almost anything, and it may be that if you have two cats your other one isn’t bothered by the same things.

I had one cat that you’d think was deaf. He wouldn’t move or raise an eyelid or an ear for anything while he was sleeping.

Unless he heard me shaking his food container!

That’s a good thing though, it shows he felt completely safe and secure letting his guard down. Or was he just lazy….

It’s hard seeing a cat stressed or scared. They don’t show emotions as we do, and will often hide how stressed they are.

But as owners, we can tell when our cats are sad. Can’t we?

Here are some basic things to do when your cat is scared:

Hopefully, after reading this article you’re now able to better understand why your cat is being scared by something you can’t see.

It really comes down to a 2-step process; find out what’s spooking them, and resolve it so they can go back to feeling safe and secure in your home.

It’s usually not that difficult. I’ve had this come up with a couple of cats myself over the years, and I helped my neighbor solve it who came to me with the same problem.