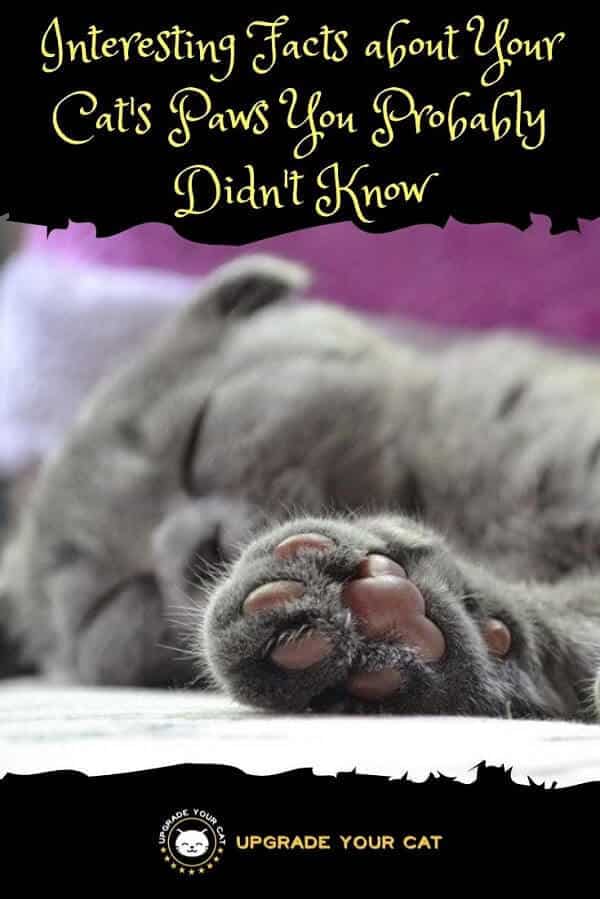 We don’t often put a lot of focus on our cat’s paws unless there is a problem. But cats use their paws for a wide range of uses outside of just walking.

There are interesting facts about your cat’s paws you probably didn’t know. Being more aware of the small particulars about your feline friend will help you better understand their behaviour.

They use their paws to communicate, climb, stay cool, and test surfaces. They also use their paws, along with their claws to chase and hold onto prey in the wild.

Cats also use their paws to help them clean themselves, reaching places their tongues cannot. Their paws are incredibly sensitive which is why a lot of cats, particular female cats will not let you touch them.

Your Cat’s Front and Preferred Paws

Cats are more protective over their front paws. There have been studies that seem to prove cats are ambidextrous which is interesting. Some cats will use one paw more than another, but they are just as adept with both.

If you’re interested in this, you can check which paw your own cat prefers to use. Just play with them or give them something to paw at a few times and see if they have a preferred paw. See if this matches up to their gender as mentioned above.

Cats Walk on Their Tippy Toes

Cats are what is known as ‘Digitigrade’, which means they walk on their tiptoes most of the time as their normal posture.

This is because walking on their tiptoes allows for quicker more explosive movements. Perfect for hunting in the wild. Just as useful for running round the house and playing too!

It also allows cats to walk around softly and quietly. You will have seen your cat stealthily creeping up on other cats or birds in the garden, they are almost completely silent when needed.

All-in-all, the tiptoes allows cats to be the effective hunters that they are. Sure, domestic cats do not need to be as proficient at hunting, but it makes them the agile animals they are.

You will have noticed that your cat’s paws are sensitive. A lot of cats have a little lash out at someone fussing them if they start fussing their paws.

They have lots of nerve endings in their paws, and it can be painful to the touch. But even if your cat happily lets you hold their paws, I don’t recommend it.

Cats use their paws to feel everywhere they step, helping them determine the temperature and how to handle the ground beneath them.

You can think of it like pressure pads. Giving signals back, they highly tuned and intelligent pads, not just clumsy feet like a lot of humans.

If you cat looks like they might have hurt their paws, you should get them some veterinary assistance as soon as possible.

Cats Use Their Paws to Absorb Shock

This is a more fancy way of saying a cat’s paws are like shock absorbers on a car. When they jump, land, and run fast their paws take a lot of the shock from the floor.

Their front claws face more inwards than their back claws. This is ideal for climbing trees and holding onto prey.

You have probably noticed cats generate a lot of their power from their back legs, with a lot more muscle for jumping. They tend to land on their front paws first to take some impact, with the bulk being handled by the back legs.

Cats Groom Themselves with Their Paws

This is a simple and obvious one, you’re probably well aware that you cat uses their paws to help them groom and clean.

There are a number of areas they can only reach by using their paws. I always think it looks cute when cats clean their faces, heads and behind their ears with their paws.

They lick their paws to get some moisture on there, and then use that to rub their fur. Kittens learn these grooming techniques from their mothers as young as 4 weeks old.

Cats Perspire through Their Paws

Cats have a pretty sophisticated way to regulate their body temperature and sweat just like we do. They sweat mostly thought their paws however.

They also perspire when they are nervous or stressed, just as humans do. You shouldn’t ever really notice any of this, if you do there may be an underlying issue.

Cats Use Scent Glands in Their Paws to Mark Territory

Cats have scent glands in their paws, and you will have no doubt seen them scratching different objects. Possibly even some of your furniture much to your annoyance.

They leave pheromones on items as markings on their territory. Other cats read these messages and understand a lot about who left the scents.

These are just some of the interesting facts about cat paws that you may not have been aware of. Cats are fascinating and complex animals, and there is a lot more than meets the eye to them.

If you ever suspect there may be any form of injury to your cat’s paws, get them seen by a vet as soon as possible.

Take care when grooming or fussing your cat too. Their paws are sensitive and have a lot of functions.