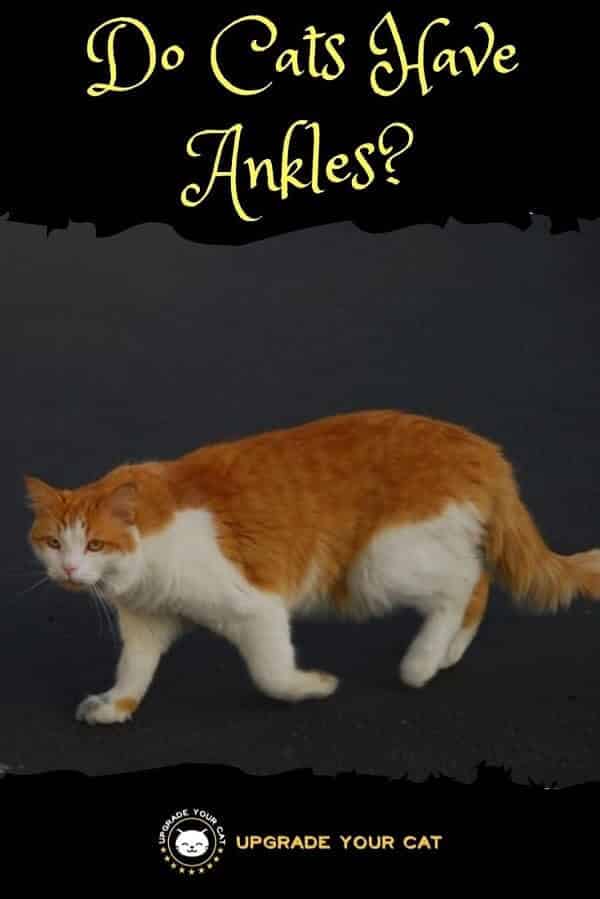 Cats do have ankles, yes. A cat’s ankles are positioned just superior to their toes and are analogous to a human wrist. They have one of them located in each of their limbs. As they are quadrupeds (four-limbed), this means they have a total of four ankles.

Curiously, cats also have elbows and knees too. The elbows are on a cats’ front limbs (forelimbs) and positioned further up in comparison to a human elbow.

Their knees, positioned on their back legs, are similarly situated.

Let’s take a look at these joints in more detail.

How Are Cats Ankles Different From Ours?

According to Doctor of Veterinary Medicine Greg Martinez, the joints of a cat, anatomically-speaking, are similar to those of most mammals.

They are designed for movement and to bear their weight.

A cat’s ankle is similar to the human elbow in that it is a hinge joint. This means it can only move in one plane (up and down).

A hinge joint can not rotate like a ball-and-socket joint (human shoulder) or slide like a condylar joint (human wrist).

A cat’s elbow is another hinge joint (like its ankle). Their knees are condylar just like humans. Most people might think that both are the same type of joint however – mainly because of how each limb can move in the same direction!

Can Cats Injure Their Ankles?

Cats, like all animals, are not immune to injury. Age, trauma, and inflammation are all things that can factor into the poor physiological functioning of your pet.

So having a good understanding of when and how this might happen is fundamental to becoming a great owner.

Cats commonly injure their ankles when jumping from heights, fighting with other cats or animals, or sometimes becoming involved in traffic accidents. Be vigilant of your cat’s activity if possible.

Also, make sure they don’t overexert themselves or push their bodies too much and you’ll minimize their risk of damaging themselves.

Injury is more likely to occur the more your cat ages too. Their bone density will decrease as the years roll on and any trauma to an ankle could cause a possible fracture.

Related – Ever wondered if cats actually have eyebrows or eyelashes?

How to Tell if Your Cat Has an Injured Ankle

The tell-tale signs of an injured ankle are if your cat struggles to walk and develops a limp.

Other key indicators can include a lack of energy or a decreased appetite, as well as audible sounds like whines or moans coming from your cat.

Further signs could be:

What to Do if Your Cat Injures Their Ankle

Obviously, the first thing you’ll want to do is seek professional help and expertise. This involves taking your cat to a veterinarian who might best advise you on the next course of action.

If your cat exhibits difficulty breathing you should prioritize the case as an emergency. Although this is unlikely in the case of a sprain to an ankle it’s still a possibility.

Remedying any respiratory problems as soon as they emerge is crucial to the long-term health of your pet.

Either way, in the case of ankle injuries you’ll want to handle your cat very carefully when it comes to transporting it.

Take as much pressure off its limbs as possible by supporting them yourself. Then place them in a carrier with delicate care.

Depending on the severity of the injury your cat might require simple pain relief or potentially even surgery.

It’s important that you monitor their progress and any potential signs or symptoms of complications regardless of their diagnosis.

How Long Will a Cat’s Injured Ankle Take to Heal?

Sprains, the more common injuries to a cats’ ankle, can take up to two weeks to fully heal. During that time it’s important that you minimize their activity and exercise so no further aggravation occurs.

Fractures can be more complicated. Oftentimes a vet will recommend surgery or placement of a splint that could keep your cat out of action for longer.

Recovery time, depending on the age of your cat, could be anything up to a few months.

Most ankle injuries have a good prognosis. Although it’s an important joint that affects a cat’s general mobility, healing usually occurs fairly quickly and without lasting problems.

You might want to take extra caution with your cat around your house though, especially if they’re particularly active and enjoy jumping from high furniture or climbing things.

Attempting to keep them inside and under observation while they heal is an absolute must too.

Related – Some facts about why cats open and close their paws.

Hopefully, this article has helped educate you a little further in the anatomical ways of your feline friend. Cats, like humans, are complex creatures.

Their bones and joints, although a little smaller and lighter, can be just as susceptible to the same stresses and strains as those of their owners.

And yes, like us, your cat(s) do have ankles, elbows, knees, and toes. Even if in a bit of a strange position!