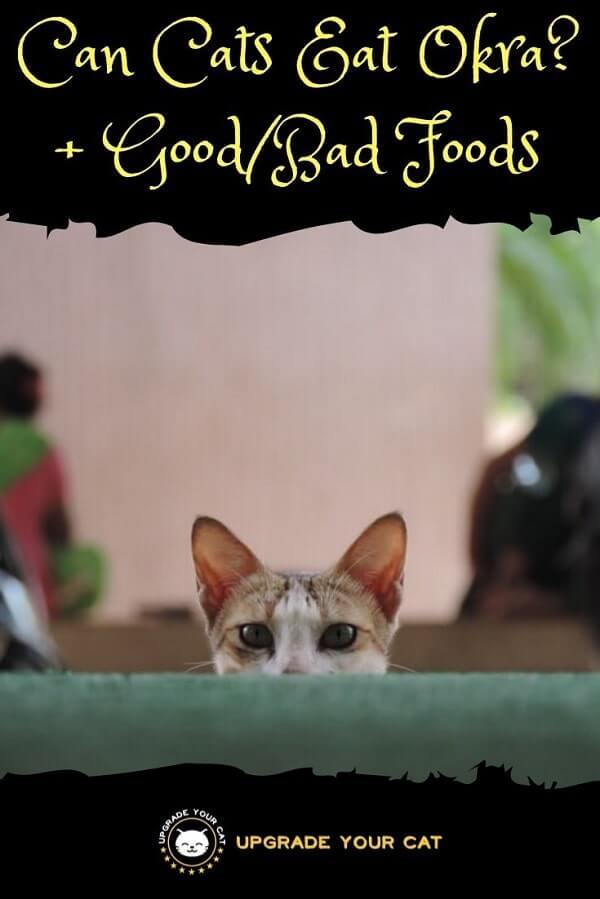 Okra is an interesting fruit. It belongs to the nightshade family, is eaten like a vegetable, and has a distinctive “earthy” flavor.

If you enjoy eating okra – as I do – you’re probably wondering, can cats eat okra?

It’s always a good idea to be aware of which foods are and aren’t safe if you have cats in the home. Because, as I’m sure you’ve found out, cats will help themselves to anything edible!

Can Cats Eat Okra? (Either Raw or Cooked/Fried)

Cats should not eat okra, no. Okra, along with other members of the nightshade family of plants produces a toxin called glycoalkaloid solanine which is harmful to pets.

According to the PetPoisonHelpline, it would take a large amount of okra or any other plant in the Solanaceae to cause severe toxicity.

So, don’t panic if your cat has been having a small nibble here and there.

It can, however, cause gastrointestinal distress in small amounts. This means a tummy upset, and possibly vomiting or diarrhea.

Not fun to be on the cleaning side of, I can tell you that. On a serious note, it’s even less fun for your cat to have an upset stomach.

For this reason, put okra on the banned list. It’s better to err on the side of caution and not let them have so much as a lick!

Why Cats Are More Susceptible to Toxic Foods Than Us

According to vcahospitals.com, cats lack certain liver enzymes that we use to break down unwanted substances and help protect us from toxins.

Therefore, they are more susceptible to becoming sick from smaller amounts of harmful foods.

Plus, their body mass is obviously a lot less than ours. They are also great at hiding when they’re feeling sick.

All of this creates a situation where ingesting a small amount of toxic or harmful foods can cause some serious health issues.

For this reason, when you know a food can potentially cause a cat some gastrointestinal issues it’s better to just avoid them having any altogether.

Some Humans Foods That Are Harmful to Cats

Now you know the risks involved with your cat taking a nibble or even a lick of something that’s potentially toxic.

With this in mind, here are some of the worst foods that you should keep well out of their reach:

Dairy Products – This always seems to surprise most people, but dairy products are a recipe for gastrointestinal issues for cats as they’re lactose intolerant.

Don’t give you kitty any milk, cheese, yogurts, etc. Despite cats loving these foods, they’re bad for them.

Chocolate – There are compounds in chocolate that cats can’t metabolize and will cause stomach issues in small amounts. In large amounts, chocolate can lead to liver failure and other health issues.

Alcohol – This is something you need to be very careful with. Even a small amount of strong alcohol can be fatal to cats.

Garlic and Onions – Along with other vegetables in the same family to a lesser extent, onions and garlic cause oxidative damage to a cat’s red blood cells. This leads to anemia and some other health complications.

Plants in the Nightshade Family – I touched on this above with Okra. Plants in the nightshade family are able to produce the glycoalkaloid Solanine which is harmful to pets.

This means potatoes (when green), raw tomatoes and the leaves, eggplant, and some other plants.

Raisins/Grapes/Currents – These are known to cause acute kidney failure in some dogs. It’s also believed eating raisins will have the same effect on cats.

It’s an area that’s still not fully understood as far as I can tell, just avoid giving them to your cat to be safe.

Raw Eggs – There are a few reasons why it’s recommended you do not feed cats raw eggs.

There is a risk of bacteria like E.coli and salmonella. Raw eggs contain a protein that can cause a vitamin deficiency. And, they are thought to also cause allergies.

Related – You can read more about foods cat can and can’t eat in the blog.

As I’ve explained, cats should not eat okra as it does contain a toxin that is known to cause gastrointestinal distress. With the potential for more serious health issues in large amounts.

There are some human foods that are fine for cats in small amounts. If you want to treat your cat I recommend sticking to cat treats though as they’ve been specially formulated to be safe for kitties.

Is Nutritional Yeast Good for Cats? (Mine Loves It!)