Black Cat Crossing Your Path While Driving: What it Means 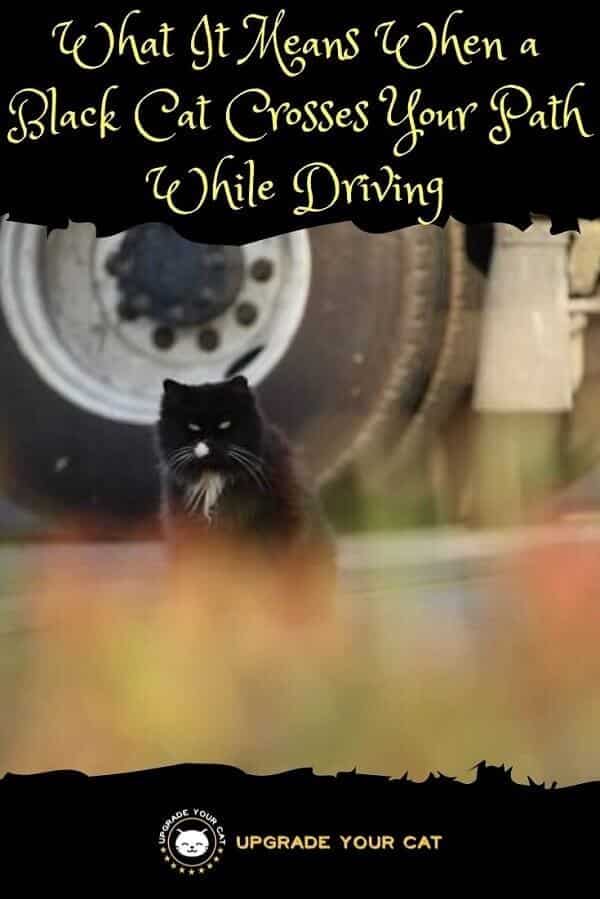 Are you superstitious or curious about superstitions? Has a black cat crossed your path while driving and you’re now wondering what – if anything – this means?

What Does It Mean When a Black Cat Crosses Your Path?

The superstitions behind having a black cat cross your path is one of the oldest and most well-known superstitions.

Yet, the meaning behind this varies from culture to culture.

For example, in the UK, Ireland, and Germany, if a black cat crosses your path from left to right it’s believed to bring you good luck.

While in most other European countries they believe it will bring you bad luck!

There are also some other specific beliefs. Such as gamblers in Las Vegas believing that if a black cat crosses them while they’re on their way to a casino – either driving or walking – it’ll bring them bad luck and they shouldn’t gamble that night.

So, which do you believe? That’s entirely up to you, but I know which I’d be banking on.

Related – You can read more about the spiritual meaning of a black cat crossing your path here.

What About Crossing Your Path When You’re Driving?

The general belief behind black cats walking across the front of your vehicle is that it’s bad luck.

According to Churchill.com, in Japan, they believe that if a cat crosses the street or road in front of you while you’re driving it can cause bad luck.

There’s also a ritual where some drivers will put an “X” on the left side of their windscreen with their right hand if it happens. Believing this will neutralize the bad luck from the event.

Researching this I found several accounts from people who said they’ve had to slam on their breaks and had some near misses due to avoiding cats on the road.

Some people consider that to be the bad luck that follows seeing a black cat on the road. Not quite what superstitions mean by bad luck, but if you’re not a believer then it’s a logical explanation.

So, Is It Bad Luck or Good Luck If You See a Black Cat?

As I already mentioned, it really comes down to your culture and beliefs.

However, if you’re a positive person (as I am) here are some of the cultures that believe black cats symbolize good luck:

Ancient Egypt – Looking all the way back to ancient Egypt, black cats were held in high esteem and believed to be good luck.

Asia – It’s widely believed across Asia that you’ll have good luck if you own a black cat.

France – Over in France, they believe that something magical is about to happen if you see a black cat. That’s the kind of positivity I like!

England – This one is quite specific, but in England, it’s believed that if a bride sees a black cat it will bring good fortune and luck to their marriage.

Scotland – In Scotland, if someone sees a black cat on their porch or the front of their house, they believe it’s a sign of good luck.

In folklore, it’s said that sailors would either take a black cat with them out to sea or leave one at home for good luck.

It’s also generally believed that if you dream about a black cat or think you see one (that might not actually be there), it’s also a good sign.

The Downside to Black Cat Superstitions

Whether you believe in superstitions or not, with the stigma surrounding black cats the unfortunate thing is that a lot of black cats end up homeless.

It’s such a problem that in the U.S. there is a Black Cat Appreciation Day every year to raise awareness around this issue. This day is supported by the ASPCA and is used to try to dispel the myth that black cats are bad luck.

If you’re currently thinking about adopting a cat, why not take a look at a black cat? Who knows, it might just bring you all the good luck and prosperity you’ve been secretly wishing for!

The topic of superstitions and whether or not black cats – or anything else – brings good or bad luck is a controversial one.

I find it interesting though. Especially when you look back at the history behind why we have some of these beliefs.

Superstitions are deep-rooted in some cultures and incredibly important to them. We have to respect that at the very least.

So, next time a black cat strolls across your path when you’re in your car or walking down the road, take a moment to think about it.

Feel free to share your own beliefs and experiences below. I’m open-minded to the topic and would love to hear what your rituals and thoughts are.