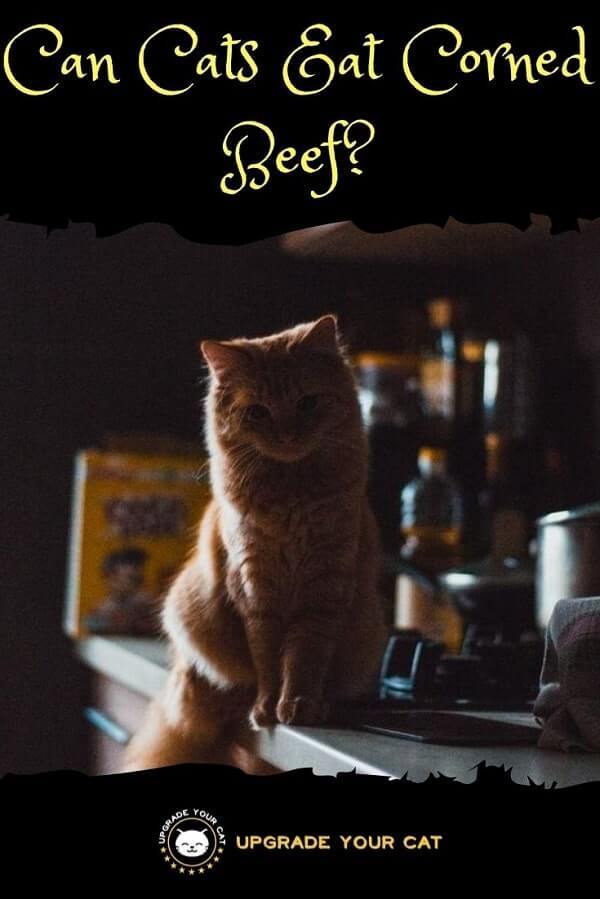 Cats can and will eat corned beef. It’s not a good idea though, corned beef is cured in rock salt and sugar and will potentially cause stomach upset, if not worse. Stick to fresh meats, or even better, kitty treats.

The ingredients used in most canned corn beef are few and very simple:

To make corned beef, the meat goes through a curing process which involves allowing the beef to absorb large grains of rock salt or “corns” of salt.

It’s then cooked and canned. Giving us that incredibly tender and flavorsome piece of beef with that distinctive salty taste.

Few will disagree with me when I say corned beef tastes great. The problem, however, is that as you can see from the ingredients above it’s loaded with salt and sugar.

This amount of salt and sugar isn’t a problem for us – in sensible amounts of course – but it’s a huge problem for cats as I’ll explain.

Why Salt Is Bad for Cats

Despite being present in just about everything we eat at some level, salt is a powerful and potentially harmful substance.

Hence why junk foods, which are high in salt, sugar, and other preservatives are bad for us.

Cats are a lot smaller than us and a lot more sensitive to salt. It’s not toxic, there is actually a small amount of sodium in cat foods as they require some salt in their diet.

But outside of their formulated food, you shouldn’t give them foods high in salt content. According to the RSPCA, it’s not known how much salt is harmful to cats but even a small amount of pure salt can be dangerous.

Ingesting salt can cause high blood sodium concentration. This can cause excessive thirst, vomiting, lethargy, and even kidney damage or convulsions in severe cases.

I can relate to the excessive thirst after eating salty foods!

Related – Spam is also a processed meat with a little too much salt!

What Meats Can Cats Eat?

You don’t have to know much about cats to be aware that they love meat. In fact, cats are classified as “obligate carnivores”, not omnivores as most people think.

Omnivores are animals (or people) that eat both meat and plants and can live with or without one or the other, at least for a prolonged time.

Obligate carnivores, on the other hand, need to eat meat as a “necessity” to survive. They require animal proteins and other nutrients found in the flesh of animals to maintain optimal health.

Now, obviously you don’t need to feed your cat meat on a regular basis, I’m sure you’re aware of that.

This is because formulated cat foods like dry kibble have all of the same nutrition they’d get from eating prey in the wild.

Meat is still an awesome – and most welcome – addition to their diet though. Just not highly processed, salty meats loaded with sugar and salt, etc like corned beef.

If you’re going to feed meat to your cat, it needs to be cooked beef, turkey, or chicken with no added preservatives or seasoning.

What Foods Are Poisonous/Toxic To Cats?

As I said, corned beef and a lot of other foods we eat aren’t ideal for cats – but they’re not poisonous in small amounts.

There are some foods that are a lot more dangerous though. It’s a good idea to be aware of these as some cats tend to try and eat anything we leave unattended.

This isn’t a complete list, so do check before giving your cat a new food for the first time. But here are some of the common foods that you should always keep well out of reach for your cats:

Garlic and Onions – The good news is that I’ve never met a cat willing to go near either of these strong-smelling vegetables. The bad news, however, is that both garlic and onions are highly toxic.

Even in small amounts, either can damage a cat’s red blood cells. This can lead to anemia or worse health issues.

Grapes and Raisins – These are the main offenders for dog and cat owners. Even ingesting a small amount of either raisins or grapes can cause kidney failure in cats. They tend to try and eat these in my experience too.

Dairy Products – This one often comes as a surprise to people because cats love milk and cream, and obviously drink their mother’s milk as kittens.

However, cats become lactose intolerant as they mature from kittens into cats. This means they lack the enzyme needed to digest the lactose in dairy products.

It’s not uncommon for humans to be lactose intolerant too. The symptoms are similar; stomach cramps, pains, and discomfort.

Alcohol – Cat’s are crafty and will finish off or try and drinks left unattended, as I’m sure you’re aware. Don’t ever leave alcoholic beverages unattended, even a small amount is incredibly dangerous to cats.

Chocolate – There are a couple of compounds in chocolate that are toxic to cats, dogs, and some other small animals.

These compounds are; theobromine and caffeine. Ingesting chocolate can cause stomach issues, problems with their nervous system, kidneys, heart, and even lead to seizures and worse.

The short answer is that cats should not eat corned beef. Despite being beef and most cats finding it irresistible, the salt and sugar content is far too high and it’s likely to cause discomfort for your kitty.

If you want to give your cat meat, go with uncured meat that is free from preservatives. Alternatives, stick to cat treats to help keep hunger at bay in between meals.