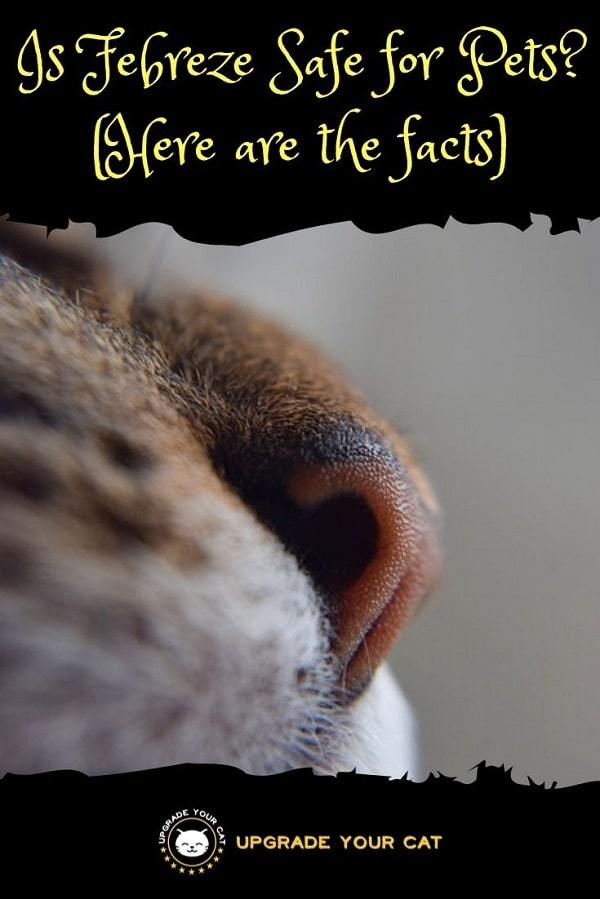 Being a lifelong pet owner, I’ve had my battles with pet odors. But happy to say I’ve always managed to keep my house smelling fresh without exposing my pets to any harmful cleaning products.

As pet owners, we should always check the products we’re using are safe to use around our pets, which brings up the question – Is Febreze Safe for Pets?

The short answer is:

Is Febreze safe for pets? Yes, Febreze is safe to use around pets when you use it responsibly and as directed. Obviously, there are some chemicals in Febreze that could cause some irritation if it comes into contact with animals directly, however.

That statement is directed mostly at cats and dogs as they are the most common household pets. You do have to be more careful around smaller animals, and birds in particular.

The smaller the animal, such as a mouse or hamster, the more affected they are by airborne products. They have much smaller lungs and are more sensitive respiratory systems.

Birds, in particular, are uniquely sensitive to airborne products, like Febreze, so it’s recommended they are removed from the room until it’s fully ventilated.

Febreze is one of the most well-known household odor eliminators on the market and is manufactured by Procter & Gamble.

It’s a best friend to most pet owners as it’s so effective at removing pet odors. You don’t have to wash everything that smells, just simply spray it with Febreze. Then wait for it t dry, and the fabrics smell clean and fresh.

They have an ever-expanding line of products, such as wax melts, fragrance plugins, air fresheners and so on. But it’s the bottle air freshener spray that’s most commonly used and what I’m focusing on in this article.

I listed the best enzymatic cleaners for cat urine here if you’re looking for a powerful cleaning solution.

What’s in Febreze: Ingredients and Toxicity

To understand the potential risk of a product, you need to know exactly what’s in it.

Here’s a list of what’s in Fabreze, and how these chemicals are classified by the Environmental Working Group (EWG) based on the environmental concern and potential health hazard:

Are there some notes that the ingredients scoring a C or a D will cause some skin irritation, aggravate allergies, cause respiratory effects, and damage vision.

But, these are all things that could result from a pet touching the solution, having it come into contact with their skin, eyes, and spending time in a room where it’s being sprayed.

None of which should happen if you’re using Febreze as directed and applying some common sense. I mean, you’re not going to spray a dog’s bedding or your cat’s favorite sleeping spot while there using it!

Is Febreze Toxic or Harmful to Dogs and Cats?

You may have heard rumors that Febreze has been responsible for harm, and even death of dogs and cats before. I know I’ve heard something along those lines over the years.

I’m not one to jump on rumors, especially something as serious as this. So, I didn’t start working on this article without doing some detailed research.

According to Snopes, which is always a reliable resource for checking out what’s really been proven, and what’s merely an internet rumor or myth. The American Society for the Prevention of Cruelty to Animals (ASPCA), has previously issued the following statement on Febreze:

Based on a thorough review by veterinary toxicologists at The ASPCA National Animal Poison Control Center, together with other outside experts, The ASPCA considers Febreze safe in households with dogs and cats when used as directed.

The keywords in that statement are “used as directed”. Almost any product that contains potentially harmful chemicals can cause harm if used incorrectly. This is saying, however, that when used correctly there is no risk of harm to cats and dogs.

Safe to use around cats and dogs. As with other air care products, not for use around birds.

How to Use Febreze Safely with Pets in the Home

Using Febreze couldn’t be easier, you just have to pull the trigger and spray until the area is damp, leave to dry, and that’s it.

With pets in the home, even though the product has been classified as safe, I only spray it when my cats are not in the room. I typically spray and air out any items outside that I can easily move.

For larger items like a couch or carpet, I make sure my cats are out and try to keep them out of the room until it’s dried out. This isn’t a big deal as it usually only takes 15-30 minutes to dry.

When I let my cats back in the room they always have a good sniff and investigate the areas I’ve sprayed. I noticed it makes them blink and step back a bit at first, it’s a strong smell to their sensitive noses.

In Summary – Is Febreze Safe for Pets?

Yes, Febreze is safe to use around cats and dogs (not birds).

Febreze themselves have issued statements saying they’ve tested it. The ASPCA animal poison control center has also done their own independent testing and came to the same conclusion.

As long as you’re using it properly and taking the precautions I outlied above, you can use Febreze around your home to remove pet odors

So, there’s no reason why you can’t have your home smelling as fresh as a breeze without doing any harm to your pets.

If you found this interesting, check out – Are Bath and Body Works Wallflowers Safe for Pets? These aren’t safe for pets!