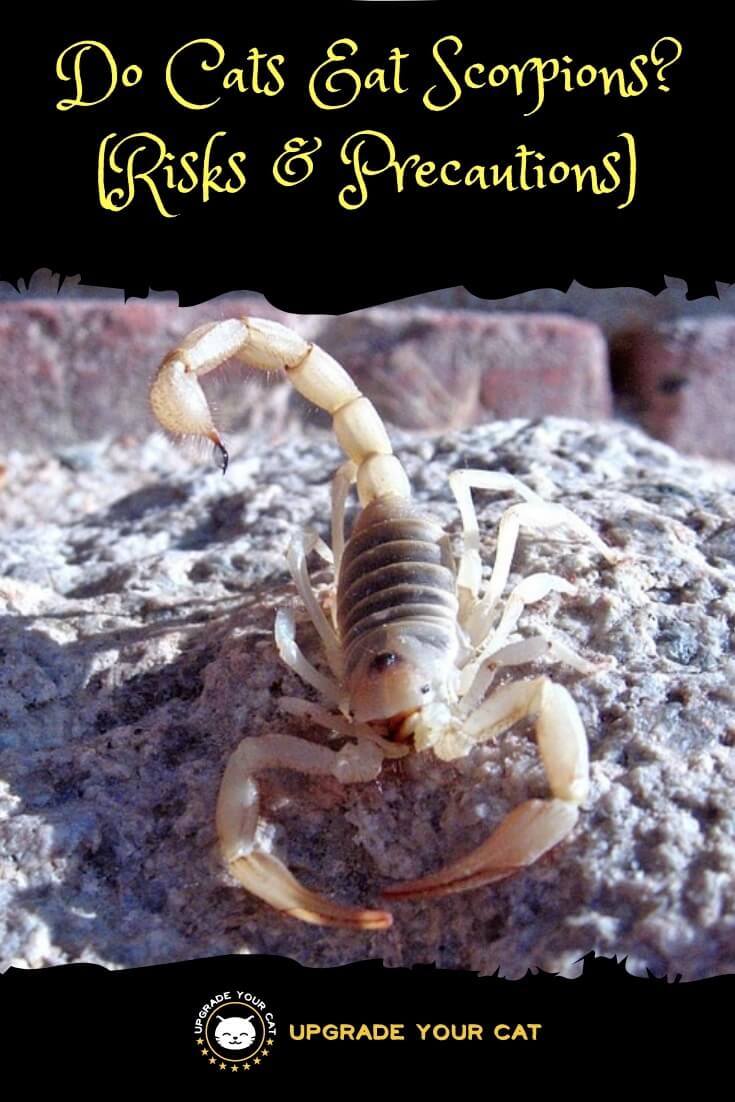 If you live in an area where there are scorpions, I’m sure you’re very aware of the dangers and able to notice scorpions and avoid them.

But, cats, on the other hand, are much more curious than we are and have an innate urge to hunt and play with prey.

So, you’re right to ask, do cats eat scorpions? And, are scorpions harmful to cats?

Cats will and do eat scorpions, yes. It’s just too hard for most cats to resist the chase. Scorpions move very quickly and are the perfect size for cats to practice their hunting skills.

Then, much like with other prey they hunt, such as birds and rodents, some cats will eat their prey. Some will just play with their new toy, some end up injuring them, it really depends on the kitty.

There are no real health concerns associated with eating scorpions. In fact, humans eat scorpions in some parts of the world. It’s not something I would ever entertain!

Obviously, there are some risks associated with poisonous scorpions as I will explain in more detail in this article. If the scorpions your cat has been eating aren’t particularly dangerous, apart from being gross it’s nothing to worry about.

Are Scorpions Harmful to Cats?

This depends on which scorpion an unsuspecting kitty comes into contact with:

According to National Geographic, there are around 2,000 species of scorpion in the world. While almost all of them are capable of stinging a cat (and us), only about 30 or 40 of them are considered poisonous enough to do serious harm with their venom.

If you’re in the US, the good news is that there are only 90 or so species, and the places you’ll find them are few and far between. Most of the scorpions are found in southwestern states, like Arizona, New Mexico, and California.

Two of the most dangerous species of scorpions in the US are:

This scorpion is the one that poses a real threat to both cats, and humans. (I’m told) the sting is very, very painful.

It can cause numbness for 2-3 days, and you’re likely to vomit and feel dreadful. So, just imagine what it does to a cat as they’re much smaller than us.

As you can see from the picture, they are light brown with those markings on their backs. They’re pretty menacing looking and grow to about 4 inches long. As the name suggests, they can be found in Arizona.

Another descriptive name, these scorpions have stripes running down their backs and a thick tail that gives them a distinctive appearance.

While they only grow to about 2.5 inches long, apparently these little guys pack quite a punch. Their sting is reported to be incredbily painful, and their venom can use some health issues.

The Stripebacked is also found in Arizona and neighboring states.

Are Cats Immune to Scorpion Stings?

I’ve heard on a number of occasions that cats are immune to scorpion venom if they are stung.

I have to say, I think this is a myth that spread for some reason and hasn’t been verified. Why do I say this? Well, I did some research online (I know, not the most conclusive way to prove something), I also asked this question to my vet and spoke with my fellow cat owner community.

No one knew for sure if cats really are immune to scorpion stings, and I wasn’t able to verify it. In fact, I read a couple of stories from cat owners stating the opposite; one said their cat had died after being stung by a Bark Scorpion, the other said their cat was really sick from a stong.

From a purely anatomical viewpoint, I think it’s safe to say that cats are not going to be immune to scorpion bites, stings, or venom.

As far as I could tell, the reasons why people tend to think this is because reports of cats injured, or even dying as a result of being stung by a scorpion are incredibly rare.

There are some reasons that can explain this, however:

All of these factors make it much more likely that cats are not stung very often. And, if they are it’s likely a pre venom string or it’s not a deep string like we get when we step on a scorpion or handle one.

How Long Does a Scorpion Sting Last?

If you or your cat have been stung by a scorpion, you’re going to want to know how long the pain lasts. The problem is, this varies depending on a few factors:

If your cat is stung by one of the less dangerous scorpions the pain can last for just a few minutes or hours. However, if they’re stung by the Bark Scorpion you need to get them to a vet or pet medical facility asap.

Stings from the Bark Scorpion are potentially fatal. The effects can last for days, and without proper medical attention a cat’s health can deteriorate quickly. This goes for you too, get yourself medical attention, don’t just take some painkillers and try to deal with the pain.

How to Treat a Scorpion Sting in Cats

Wiki-pet has some tips on how to help treat a cat that has been stung by a scorpion. They stress that calling your vet is the first thing to do, and take their advice from there. Meanwhile, to help your cat feel more comfortable, you can:

Try and calm them – They’re going to be pawing at it and flipping around a bit. Do everything you can to calm them down. This might mean wrapping them up in a blanket, or holding and fussing them.

Put an Elizabethan collar on – Not many people have a cone collar lying around. But if you do, put it on to stop them licking at the infected area.

Give them an antihistamine – Scorpion venom contains a number of neurotoxins, one of which is histamine. If you have any antihistamines for your cat this will help lessen the pain a good deal.

Don’t panic – I know, this is easier said than done. But try not to panic, it only makes stressful situations worse for everyone involved. If you can keep a clear head you’ll think and act clearer, which is vital in a medical emergency.

Cats do eat scorpions, yes. At least, some cats will. Some will be smart enough or had a shock before and know it’s not a good idea to mess with these nasty little critters.

Eating a scorpion isn’t a cause for concern. Believe it or not, they are edible. Humans even eat them in some parts of the world. There is, however, some risks involved with the few species that are poisonous and potentially harmful to cats.

Know which species are found in your area and be aware of the dangers to your kitty. It’s a myth that cats are immune to scorpion stings and venom. Should the worst-case scenario happen, act quickly and get them the appropriate medical attention.

Related Content – Do cats eat frogs and toads? The risks and precautions explained.