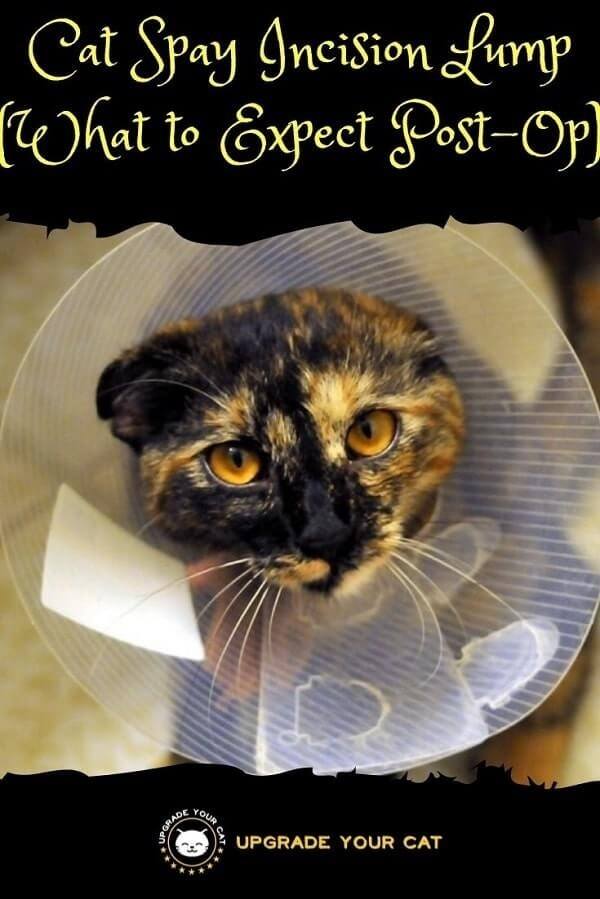 If you’ve just had your cat spayed you may have noticed what’s called a cat spay incision lump. This is exactly as it sounds, a lump in the area that has the incision for the operation.

It’s more than likely nothing to worry about, but you need to have it checked out. My last cat we had spayed had a huge lump within the first couple of days, which turned out to be a hernia as I’ll explain later.

After talking through this problem with my vet, and doing some research into the causes and types of incision lumps after a spay surgery. It opened my eyes to a lot of interesting information and possibilities that you need to be aware of if your cat has a lump.

What to Expect After a Spay Surgery

It’s common to see some form of lump or swelling under the stitches where the incision was within the first few days. This is called a ‘suture reaction’, which means that your cat’s body is reacting to having sutures in and healing.

Things to look out for that indicate there might be more to the lump than just a suture reaction are:

Related: Check this post for information on why cats leak brown fluid.

Other Reasons for a Cat Spay Incision Lump

If you’re concerned that the lump on your cat’s stomach after being spayed is more serious than the normal lump, it’s likely to be due to one of the three following reasons:

Infections After Being Spayed

It’s possible that your cat has picked up an infection due to having an open wound. There are many ways bacteria can get into the incision and cause an infection. The how’s and why’s don’t matter, what’s important is that you do something about it.

Your cat is almost certainly going to need some antibiotics if it’s an affection. So book in a trip to the vet.

Seromas After Being Spayed

Seromas are fairly common after surgery. A seroma is a buildup of fluid under the surface of a cat’s skin where the incision was made due to blood plasma seeping out of ruptured blood vessels.

The interesting thing about a seroma is that they can appear anywhere from a couple of days to a couple of weeks after surgery. The good news is that in most instances it will disappear on its own as the cat’s body adjusts and deals with the excess fluid.

If it doesn’t look like it’s shrinking, or you have any other reason for concern you need to get it checked out.

Hernias After Being Spayed

One of my cat’s had a hernia after being spayed. I noticed there was something odd about the lump because it was sticking out further than normal swelling and wasn’t shrinking. When I touched it didn’t hurt her, but I was able to push it back quite far.

Hernias form under the skin after an operation due to tears in the abdominal wall allowing fat, intestines, or other internal organs to push through. It sounds a lot worse and much more grotesque than it actually is.

It wasn’t a serious hernia luckily and my vet was able to push it back in so that it stayed. I kept a very close eye on her over the next days and weeks to make sure it didn’t come back as her scar healed.

Just as we do after surgery, cats need some care and attention and the little bit of extra special looking after. Here are some things you can do to speed up the recovery process:

The incision scar isn’t always visible, after all, it’s on the underside of their tummy. For the first two weeks, you should be taking a quick look at their scar three or four times a day.

Keep an eye out for the stitches becoming loose, the incision opening, and any lumps as I’ve been discussing in this article. If you see anything the causes you concern, get it checked out sooner rather than later.

Prohibit Them from Licking or Biting the Scar

After the surgery was carried out the vet should have given you a cone, called and the Elizabethan collar. Which are those large plastic funnels you probably seen before that go around their necks.

Make sure your cat wears this for the first two weeks at least. I don’t know any other effective way to stop a cat licking or biting at the surgical wound if it’s bothering them. But even letting them have a quick groom over the area can cause infection or for the wound to open.

This might sound obvious, but I know how easy it is to give in to a cat or change plans if you feel like the wound isn’t healing quick enough. However, sticking to the advice of your vet is always going to be the best option.

This is particularly true when it comes to medications or other products you want to use on your cat. If there’s anything you’re unsure about, give them a quick call. They might have to get back to you if they’re busy, but I’ve never met a vet that wasn’t happy to answer questions about post-op aftercare.

Encourage Them to Relax

The healing process takes rest and time. We can’t speed up time, but we can encourage our cats or kittens to rest more. A little easier said than done with a hyperactive kitten, but do what you can.

I also suggest not handling your cat or picking them up as often as you normally would. For the first couple of weeks, the stitches really are quite fragile and can easily work loose with a lot of movement or handling.

It’s perfectly normal to see a cat spay incision lump of some kind. There are, however, some reasons I’ve highlighted in this article that the lump maybe something more serious. The main causes are:

It typically takes a couple of weeks for a spay operation incision to heal to the point where your cat can behave normally again. Such as going out, running, jumping, and they can’t do a lot with an Elizabethan collar on anyway.

Until then, I suggest keeping a very close eye on them. If you spot any unusual lumps or things that you’re concerned about, take them back to the vet that did the operation as soon as you can.