Can Cats Eat Refried Beans? (I Explain Why Not) 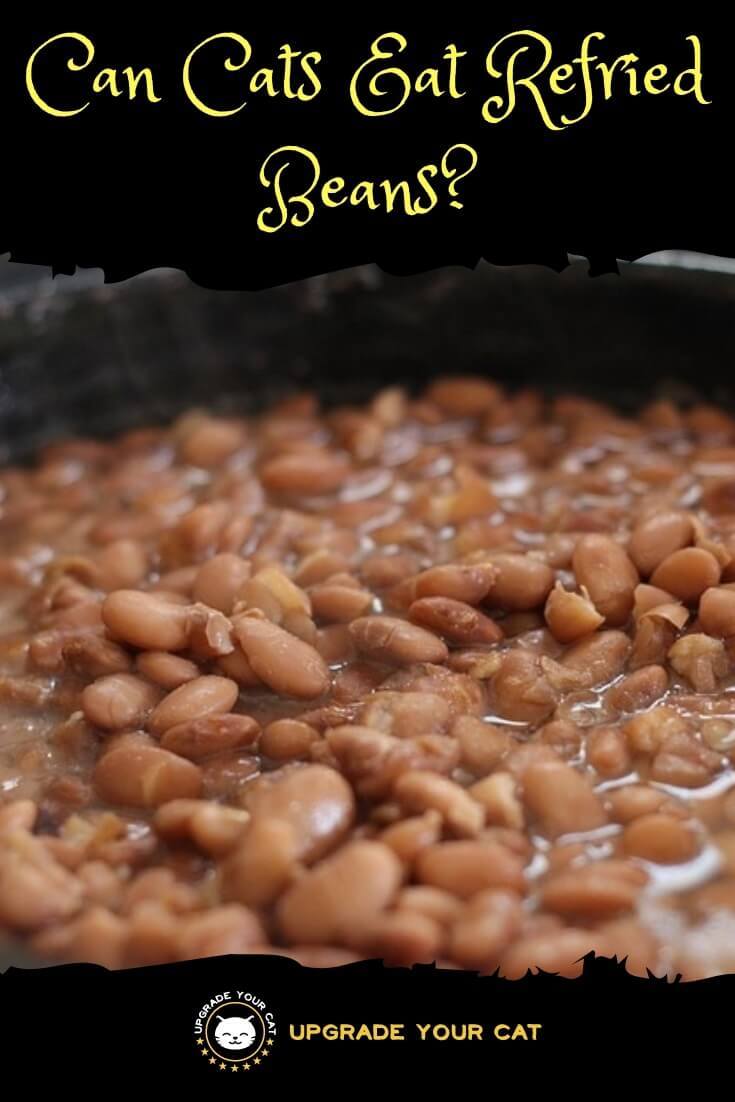 I know one thing, I love Spanish and Mexican cuisine, so I eat a lot (or should I say too much) of refried beans, and my cat has had a nibble on occasion.

So, I decided to do some digging to find out if cats can eat refried beans, whether or not their nutritional content is good for them, and more.

What Exactly Are Refried Beans?

I’ve enjoyed refried beans for as long as I can remember, yet I never actually looked into what refried beans are and how they are prepared.

I think like most people I just assumed they were beans that had been fried twice. Hence, being called ‘refried’.

This isn’t actually the case. Refried beans are called frijoles refritos in Spanish, which translates as ‘well fried’.

Well fried is different from refried. Something has changed slightly in translation and gives the wrong impression. It’s not a big deal, but it’s something.

Refried beans are not prepared by being fried more than once. They are only fried once, albeit well fried. Some seasoning is added, and they are mashed up.

Are Refried Beans Healthy for Cats (And Us)?

The recipe for refried beans can vary depending on the exact seasoning used and what they are fried in.

The basic ingredients in a traditional dish, however, are black beans or pinto beans, pepper, salt, spices, and bacon fat or lard.

Just reading those ingredients will give you a good idea that refried beans are not going to be good for cats. They aren’t typically a healthy option for us either, (sorry, I know how delicious they are – trust me).

The main problem is that they are high in sodium, which is a huge red flag for cats. Cats only need a small amount of salt, or sodium in their diet, which they certainly get from their cat food.

An excess of sodium can cause excessive thirst, vomiting, diarrhea, constipation, and worse, mood swings, seizures, and is potentially fatal in large doses.

Then there is the high fat content. That’s the bit that makes them so tasty, but it’s also something that’s not ideal for cats to say the least.

Cats have complex dietary needs. They need a balance of the six major nutrient groups, these being: vitamins, minerals, protein, carbohydrates, fat, and water.

Refried beans are definitely too high in fat content in relation to the other nutrients to be anything more than a very occasional treat.

The answer to, ‘can cats eat refried beans?’ is NO.

I know what a lot of you reading this are thinking, your cat can eat refried beans, and has done a few times, right?

Most cats love refried beans, most types of beans really. I’m not sure exactly what it is about beans that they can’t seem to resist, and while some beans are OK, refried beans are not!

The reality is that refried beans are too high in fat. Which is no surprise as they are typically fried in bacon fat or lard.

They are also seasoned in spices, of which garlic and onion can be harmful to cats. Not to mention the salt and pepper, and high sodium content, three more no-no’s.

My Cat Ate Some Refried Beans, Should I Be Worried?

If you had prepared some burritos, nachos, or a bowl of refried beans only to take your eye off it for a minute and find your cat having a nibble, don’t panic.

A small amount, like a spoon or two shouldn’t cause any problems. Any more than this and it’s probably a good idea to pick up the phone to a vet and just run it by them and see what they say.

If it has just been a lick or a nibble, make sure they have plenty of fresh water available. The sodium content can cause thirst, plus they may want to get the taste out of their mouths depending on how spicy you have your beans.

Just keep an eye on them for the rest of the day too. Check your cat is eating normally, isn’t showing signs of being sick, wretching, diarrhea, or any other abnormal behavior.

If you enjoyed reading, ‘Can Cats Eat Refried Beans?’ and found it helpful, be sure to check out other foods cats can and can’t eat along with other behavior-related content in the blog. Thanks!

Is Nutritional Yeast Good for Cats? (Mine Loves It!)

How Much Should a 10-Week Old Kitten Eat? (Daily Amount)

Can Cats Eat Whipped Cream? (I Explain the Pros and Cons)